On the 21st July 2007 myself and my friend James Whyte took part in the Mongol Rally.

Together with 200 other teams we attempted to drive from London Hyde park to Ulan Bataar in Mongolia in only 30 days.

There were only four mountain ranges, two deserts and 8000 miles of potholes and dirt roads between us and the finishing line. All teams must complete the rally in a car with less than 1000cc under the bonnet. We took a 1988 2CV6 Special, called ourselves 'Team Clouseau' and the car 'The Hornet'.

We managed to complete the rally in 28 days raising plenty of cash for Christina Noble Children's Foundation (CNCF) and Mercy Corps Mongolia. 'The Hornet' remained in Mongolia and was auctioned off for more important charity funds.

The rules of this Rally have since been changed and the amount of competitors soared which makes it a sightly different beast today. However I am glad we took part in the rally when it was very much in its infancy along side Morris Minor's, mini mokes, renault 4's, mini's and other 2CV's. 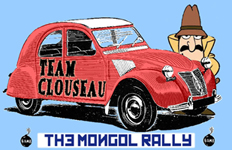 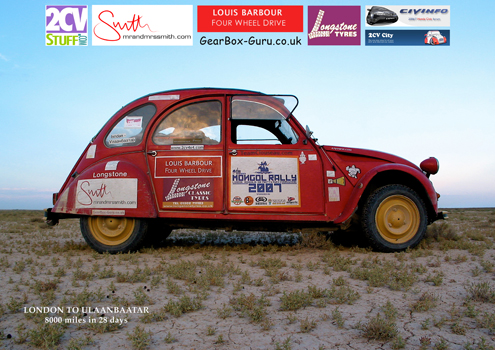 A musical montage featuring highlights of the Rally